What you need to know about the Early UK General Election

What you need to know about the Early UK General Election

Since June 24, 2016, the United Kingdom has been experiencing numerous rounds of uncertainty driven by the results of the Brexit referendum, which urged the UK to leave the EU. The divorce between the United Kingdom and the European Union should have happened on March 29th, 2019. However, the disagreement on exit terms in the UK parliament forced a new government, several extensions to the Brexit deadline, and an early general election.

The United Kingdom is holding a general election on December 12, 2019, where the results could promote the end of the Brexit Saga. Since he was appointed as a prime minister, Boris Johnson was focusing on delivering Brexit, which would allow him to devote his efforts to other domestic matters. The latter and his conservative party are looking for winning the parliament majority to proceed with their agenda smoothly. On the other hand, Jeremy Corbyn and the Labour party oppose the current Brexit stance, aim for holding a second referendum, and ruling out a "no-deal" Brexit.

What do the latest polls suggest?

YouGov, the British international Internet-based market research and data analytics firm, applied the multi-level regression and post-stratification (MRP) model, which correctly called 93% of the seats in 2017. The latest and final findings suggest that the Conservatives would have 43% vote shares, and the Labour would have 34%, translated to 339 seats for the conservatives, and 231 seats for the Labour. Therefore, the Conservative party will likely have a small overall majority of 28. However, YouGov stated that a 5% margin for error would make it hard to rule out a hung parliament. 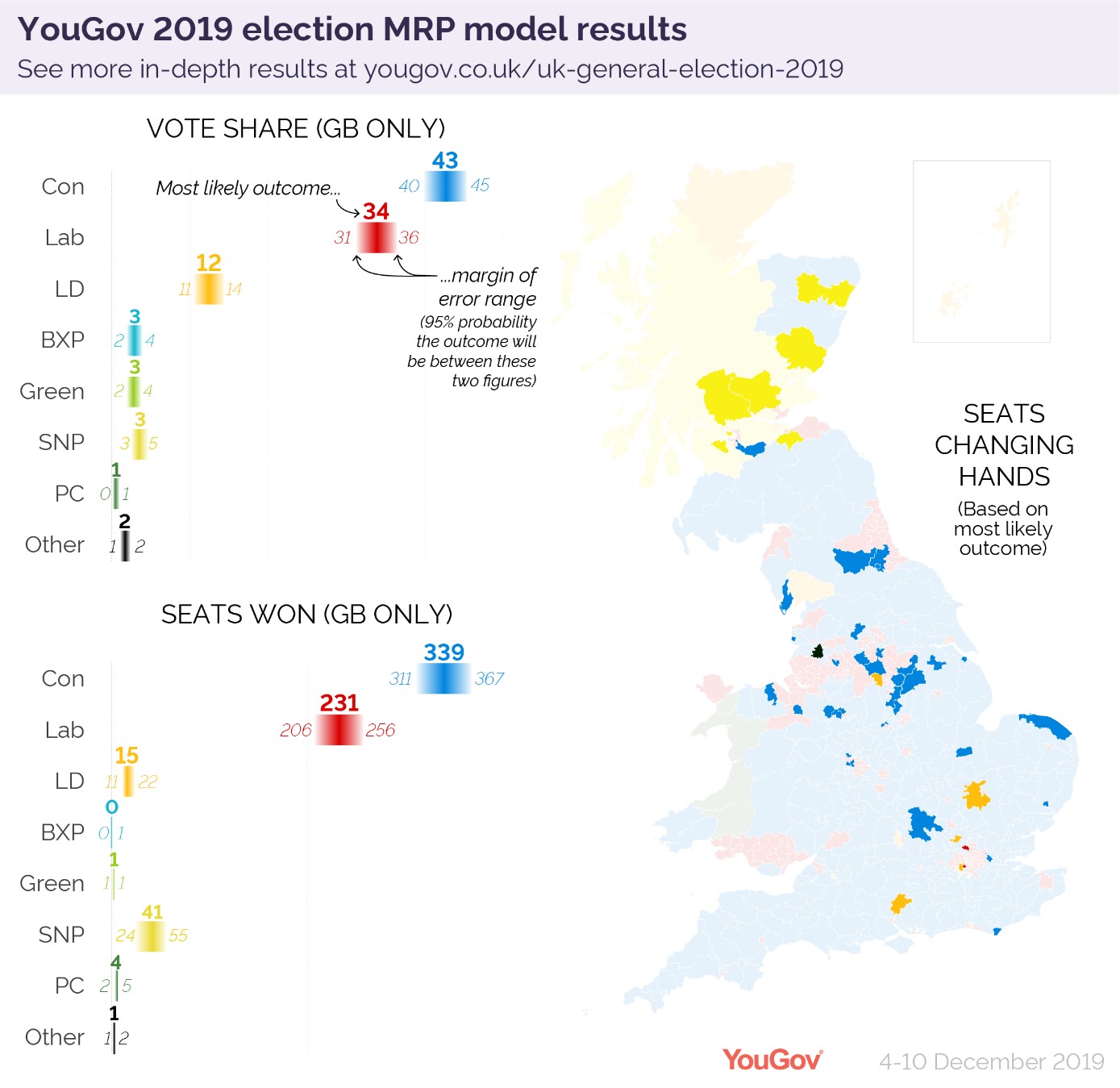 How would the election results affect pound pairs and FTSE?

Recently, the British pound strengthened against rivals on prospects of the Conservatives' majority, which would lead to a successful Brexit, lessening the risks over the United Kingdom's economic outlook. The GBPUSD rallied to a nine-month high of $1.3215, testing a down trendline formed by combining the high of July 2014 and April 2018. In the case of a significant majority for conservatives, the GBPUSD could retest the 2019 high of $1.3380, which coincides with the 200-week exponential moving average. On the other hand, a hung parliament could weigh on the pair and drive it lower to examine the first support zone of $1.3000, and later $1.2750 where the 100-day and 200-day exponential moving average merge.

The FTSE100 traded in a tight zone since late July 2019. The index found support slightly below 7000, and resistance above 7400. The Brexit uncertainty crushed investors' risk sentiment and appetite for investment in the United Kingdom. A parliament that would provide clarity over the future of Brexit, could restore confidence and push FTSE to the first upside resistance zone near 7400, and later to retest this year's high of 7670, while more complications could force a drop to the support zone below 7000.

The UK general election is considered among the top risk events this year, where we can encounter sessions of high market volatility on pound related instruments during voting or results announcements. We always advise our clients to stick to their proper risk management techniques to avoid being exposed to uncalculated risks. ICM strives to provide its clients with superior trading conditions, and a high level of funds protection through distinct insurance plans.

We wish you all the best in your trading activities. For any further assistance, please do not hesitate to contact us at clientservices@icm.com