Foreign Exchange (FX or FOREX) is the cornerstone of all international capital transactions and surpasses the huge American domestic money markets in terms of liquidity and depth; even the futures and stock markets are insignificant in comparison.

The majority of Foreign Exchange transactions are neither directly related to international trade nor to international settlements but are in fact speculative in nature. For every trade-related transaction in the FOREX Market, there maybe quite a few speculative ones. Foreign Exchange is one of the world's fastest growing industry today and its growth can be attributed to its substantial liquidity and to the orderly manner in which it functions.

Spot FX, unlike stocks and futures instruments, are not traded on an exchange. Through technological advances in the electronic and telecommunications fields, networks of banks and brokers have gained access to a virtually instantaneous system of global transfers of information, data and funds. With the aid of such developments, spot FX has gained a significant advantage over other financial products that are limited to certain time zones and have to endure the erratic strains and confusion of trading floors.

Banks and brokers these days operate on screen-based systems where two-way prices are continuously fed in and dealt on by participants. These systems allow for greater transparency and instantaneous access to price information anywhere in the world. 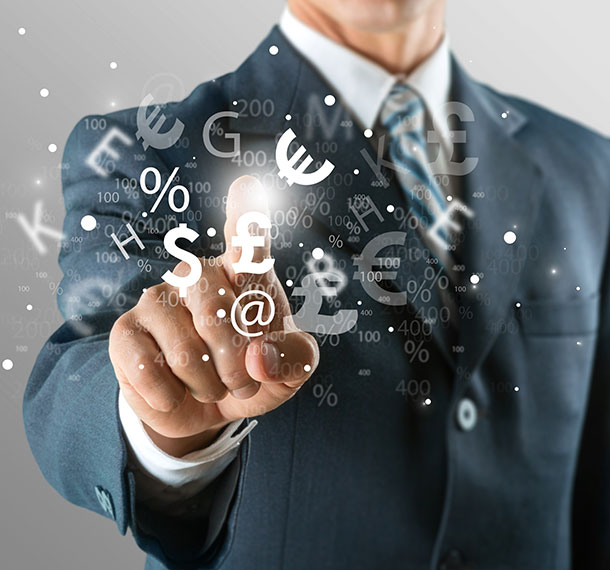 Most FX trading software encompass a full back office function that makes it easy for the trader to realize the value of open positions as well as the profit and loss of closed trades. However, it is important that traders understand how a trade works and how to calculate profits and losses manually.

Currencies can be either bought or sold, but they must be traded against each other. There are over 150 currency pairs that can be traded but the most liquid with the highest turn-over are the "majors".

Primary (base) vs. Secondary Currencies

The primary currency, or the base currency, is the reference that defines the contract size. The profit and loss calculation however is always on the secondary currency. Examples are as follows:

As with all financial products, FX quotes include a "bid" and "ask". The "bid" is the price at which a market maker is willing to buy (clients sell) while the "ask" is where the market maker will sell (clients buy) the currency pair. The difference between the bid and the ask prices is referred to as the spread. In the wholesale market, currencies are quoted using five significant numbers, with the last placeholder called a point or a pip. In spot FX, like any traded instrument, there is an immediate cost in establishing a position. For example, EUR/USD may be bid at 1.3150 and ask at 1.3153, this three-pip spread defines the trader's cost, which can be recovered with a favourable currency move in the market.

By quoting both the bid and ask in real time, ICM Capital aims to ensure that traders always receive a fair price on all transactions.

Forex markets use the same terms to express market positioning as most other financial markets. But because currency trading involves simultaneous buying and selling, being clear on the terms helps — especially if you are totally new to financial market trading.

A long position, or simply a long, refers to a market position in which you've bought a security. In FX, it refers to having bought a currency pair. When you are long, you are looking for prices to move higher, so you can sell at a higher price than where you bought. When you want to close a long position, you have to sell what you bought. If you are buying at multiple price levels, you are adding to longs and getting longer.

A short position, or simply a short, refers to a market position in which you've sold a security that you never owned. In the stock market, selling a stock short requires borrowing the stock (and paying a fee to the lending brokerage) so you can sell it.

In forex markets, it means you are sold a currency pair, meaning you have sold the base currency and bought the counter currency. So you are still making an exchange, just in the opposite order and according to currency-pair quoting terms. When you have sold a currency pair, it's called going short or getting short and it means you are looking for the pair's price to move lower so you can buy it back at a profit. If you sell at various price levels, you are adding to shorts and getting shorter.

In currency trading, going short is as common as going long. "Selling high and buying low" is a standard currency trading strategy. Currency pair rates reflect relative values between two currencies and not an absolute price of a single stock or commodity.

Because currencies can fall or rise relative to each other, both in medium and long-term trends and minute-to minute fluctuations, currency pair prices are as likely to be going down at any moment as they are up. To take advantage of such moves, forex traders routinely use short positions to exploit falling currency prices. Traders from other markets may feel uncomfortable with short selling, but it's just something you have to get your head around.

Having no position in the market is called being square or flat. If you have an open position and you want to close it, it's called squaring up. If you are short, you need to buy to square up. If you are long, you need to sell to go flat. The only time you have no market exposure or financial risk is when you are square.

Margin is a deposit giving the trader the right to buy or sell the value of the underlying contract of a currency or derivative instrument. This margin requirement allows the investor to trade a larger amount of money with a relatively small deposit. The small margin payments are one of the main reasons why spot FX has become so attractive for individual investors.

Here's an example to help you understand how required margin ratios work. Say you have an account with a leverage ratio of 30:1 (so $1 of margin in your account can control a $30 position size), but your broker requires a 100% margin ratio, meaning you need to maintain 100% of the required margin at all times. The ratio varies with account size, but a 100% margin requirement is typical for small accounts. That means to have a position size of $3,000, you'd need $100 in your account, because $3,000 divided by the leverage ratio of 30 is $100. If your account's margin balance falls below the required ratio, your broker probably has the right to close out your positions without any notice to you. If your broker liquidates your position, that usually means your losses are locked in and your margin balance just got smaller.

Profit and loss (P&L) is how traders measure success and failure. A clear understanding of how P&L works is especially critical to online margin trading, where your P&L directly affects the amount of margin you have to work with. Changes in your margin balance determine how much you can trade and for how long you can trade if prices move against you.

Unrealized and realized profit and loss

Most online forex brokers provide real-time mark-to-market calculations showing your margin balance. Mark-to-market is the calculation that shows your unrealized P&L based on where you could close your open positions in the market at that instant. Depending on your broker's trading platform, if you are long, the calculation will typically be based on where you could sell at that moment. If you are short, the price used will be where you can buy at that moment. Your margin balance is the sum of your initial margin deposit, your unrealized P&L, and your realized P&L.

Realized P&L is what you get when you close out a trade position, or a portion of a trade position. If you close out the full position and go flat, whatever you made or lost leaves the unrealized P&L calculation and goes into your margin balance. If you only close a portion of your open positions, only that part of the trade's P&L is realized and goes into the margin balance.

Calculating profit and loss with pips

No matter which trading style you decide to pursue, you need an organized trading plan, or you won't get very far. The difference between making money and losing money in the forex market can be as simple as trading with a plan or trading without one. A trading plan is an organized approach to executing a trade strategy that you've developed based on your market analysis and outlook.

Here are the key components of any trading plan:

How large a position will you take for each trade strategy? Position size is half the equation for determining how much money is at stake in each trade.

Deciding where to enter the position:

Exactly where will you try to open the desired position? What happens if your entry level is not reached?

ICM Access Mail Call
CFDs and Spot FX are complex instruments and come with a high risk of losing money rapidly due to leverage. 78.03% of retail investor accounts lose money when trading CFDs with this provider. You should consider whether you understand how CFDs and Spot FX work, and whether you can afford to take the high risk of losing your money. Read More
Read More